Why Flutter is Ideal Framework To Build A Perfect App? [Top Reasons] 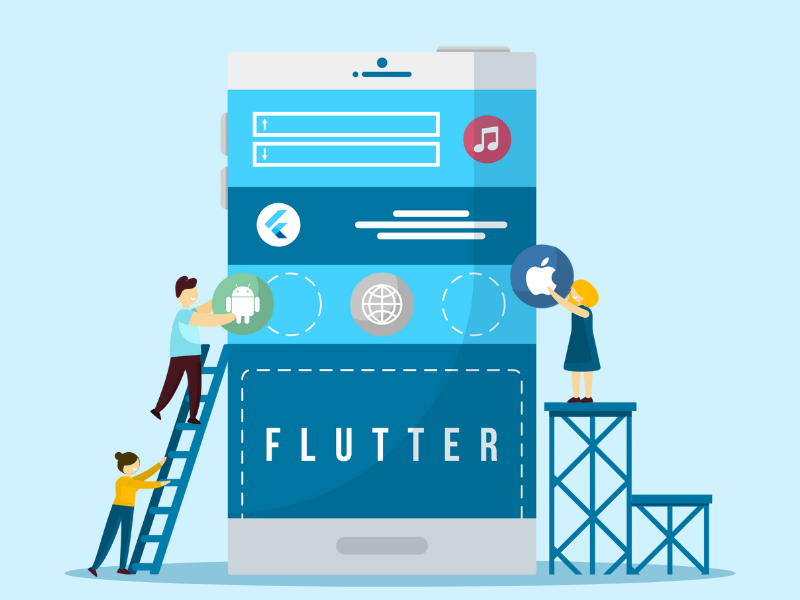 The rapid evolution of technology and in addition to this, the pandemic period resulted in the transformation of many brick and mortar enterprises into digital ones. Certainly, digital presence across all the channels would not have been possible without the mobile apps. This ultimately led to the high demand for mobile app development services.

Mobile application is an economic tool bestowing a plethora of functions and uses to its users as well as owners. Leveraging the app benefits, many entrepreneurs are doing pretty well on the digital platform. Well, you must also be thinking of marking your presence on the digital market via a prolific mobile app. Note, there are many startups who chose the wrong platform for their mobile app and are facing a huge failure. If you don’t want to experience any failure, then you should hire Flutter app developer to build an excellent and money-spinning app.

Now, being new to mobile apps, you need to ponder over these two questions:

The very simple answer to both the questions is Flutter! Flutter! & only Flutter!

Undoubtedly, a mobile app developed using Google’s Flutter has a promising future. Flutter SDK, an open-source UI toolkit launched by Google, uses a single codebase for developing high-performing applications that can run flawlessly on any platform.

Prior to approaching a Flutter app development company, you must first know about Flutter, some interesting facts about it and the benefits it offers. 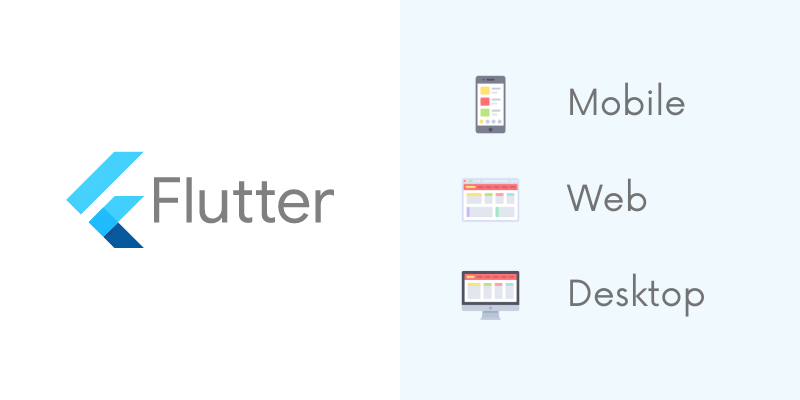 Google came up with a free open-source UI SDK in May 17 named Flutter. Using Flutter, native mobile applications can be created with a single codebase, which implies that the need for creating different codebase for the app for different platforms has been completely eliminated. Hence, because of this, Google Flutter is the most preferred SDK amongst the developers when an app has to be made for multi-platforms quickly and on a low budget.

It would be wrong to call Flutter a framework, rather SDK is the right phrase for it, as it comes with a lot of perks that are needed for building a cross-platform application, like rendering engine, handy widgets, easy testing, and integration of APIs.

Let us now go through some interesting facts regarding Flutter for mobile app development.

Certainly, Flutter has gained traction and has become popular over other chief cross-platform frameworks like Angular JS, Xamarin, React Native, and many more. This statement is not enough for convincing you to opt for Flutter. Hence, here are some good reasons for choosing Flutter SDK to develop a mobile app.

The foundation of Flutter is Dart SDK which contributes to creating powerful designs and architectures. Apart from that, Dart promotes standardization, consistency, integration, and simple management because of which it is much superior in comparison to other cross-platform languages and frameworks.

Before investing in any app development framework, businesses generally hunt for the potential and future of that framework. Given that Flutter has been launched by Google, it has a promising future. Considering the basics, the Dart SDK has been designed, thereby making it the best choice for mobile app development services offering companies.

Know more: Top 5 Reasons To Build An App For Your Business

The most interesting fact about Flutter is that with a single codebase a Flutter app developer can build apps that can be run on embedded devices, mobile, desktop, and web. With the least amount of changes in the native codebase, the developers can use it across various platforms. This ultimately reduces the turnaround time for building a mobile app for more than one platform and drastically trims down the cost of developing, testing, QA, and maintenance.

Customization of all the visible objects like shadows, shapes, and colours and clipping or transforming of icons and images of the app is very easy when Flutter is used. Without any additional workloads, the entire application development process can be simplified by using Flutter.

◉ Different Themes For Every Platform

Despite having the same codebase, an app can have different themes and this is possible only when Flutter is used. Flutter comes with a wide array of mobile app themes for creating apps with different looks for various platforms.

Flutter has been designed in such a manner that it provides an extensive range of easy-to-access and ready-to-use app widgets so that the app can be customized swiftly. Also, the developers need not have to write the codes for every widget from scratch which helps in saving time.

The language that Google Flutter uses is Dart which is derived from Google’s in-house language. Dart SDK is a general-purpose and one-source language; hence every developer finds this language quite simple as well as easy-to-access in comparison to other languages. Apart from developing mobile apps, Dart can be used to develop desktops, web, and mobile apps.

The ‘write the code once’ factor of Flutter sets it apart from other frameworks. Flutter changed the traditional method of writing codes. Now, the developers don’t have to write different codes for every single platform.

As a single codebase can be used for developing an app for multiple platforms, the developers need not have to test the app for every platform. Also, only one code has to be tested which saves plenty of time. With easy testing, the developers can check the mobile app deeply and accelerate the app deployment time.

The same thing is applicable when we talk about maintenance. Where different codebases are used for developing an app for multiple platforms, the developers have to go through each code which is time-consuming. But, in the case of Flutter-backed apps, a single codebase will demand maintenance. Once any issue or error is spotted, the developers can quickly correct them and the issue is fixed for all the platforms.

Flutter is creating a buzz among the Flutter app developers and this is just because of its “Hot Reloading” feature or you can also say “Hot Restart” feature. Within seconds, the developers can view modifications in the code and see the app development progress simultaneously. Also, they can fix bugs faster. The modifications and fixings are done so quickly that it trims down the reloading time on emulators, simulators as well as hardware for Android and iOS platforms.

Putting it concisely, the above-stated functionalities and features of Flutter will surely encourage you to probe further to discover more about its core systems. Definitely, the results will impress you and you will opt for the Flutter app.

As of now, when you have gained deep insight into the benefits of Flutter, you should now have a look at the companies that are having Flutter app: 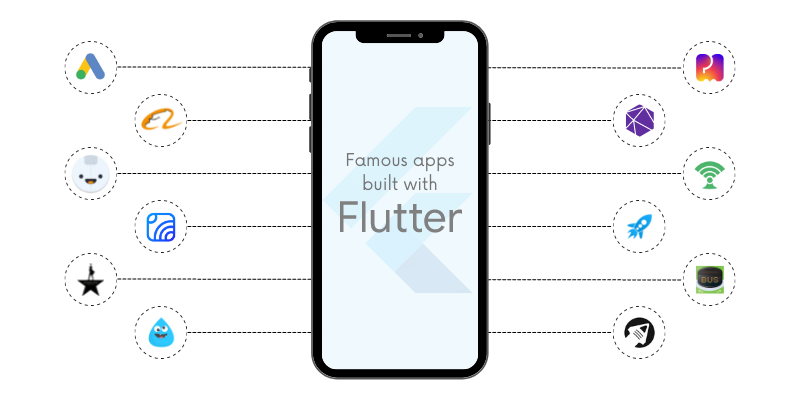 Apps That Can Be Build Using Flutter

The biggest advantage of Flutter is that it is not limited to the development of only mobile apps. Various other apps can be easily, convenient, and quickly built with the help of Flutter.

‘HummingBird’ is a project that was launched by the Flutter community with an aim to build graphics-rich and highly interactive web apps. On Dec’18, while launching Flutter 1.0, the Google Flutter team officially disclosed the upcoming goals and plans in Flutter that included the development of web apps with Flutter.

Know more: Mobile App or Web App – Which One Should Be Developed First?

While taking the advantage of Flutter SDK’s features, the app developers are building desktop apps. Flutter was programmed targeting the development of apps for almost all the devices that include Android, iOS, macOS, Linux, and Windows using a single codebase.

The integration of Flutter SDK with IoT components can be done with ease enabling the development of modern apps. Despite being a new framework, Flutter gained immense popularity after the launch of Flutter 1.7 (May 2019).

Considering Flutter as the game-changer or extremist in the world of app development won’t be wrong. It bestows a wide range of opportunities for the Flutter app development company that is into developing all types of apps for multiple platforms. Besides this, it helps in saving resources, time, and money as well. For those startups and entrepreneurs having budget limitations, Flutter is just like a blessing as it will help them to build an app within budget while meeting all their app needs. Without wasting time any further, hire the best Flutter app development services offering company and get started with a Flutter-powered app.